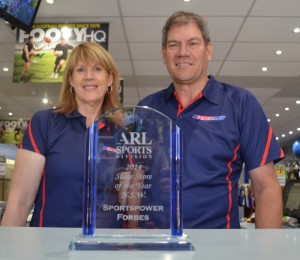 Bowns SportsPower has been the family sports store in Forbes since 1994. Ian and Kerry began the store as Sportsscene in August 1994. In 2000 SportsScene joined with SportsPower to become the largest independent sports group in Australia. In March 2015 Bowns Sportspower Forbes was also awarded the NSW Sportspower Store of the Year award.

Ian & Kerrry have had the love of sport in Forbes for many years, having played many sports and been involved with sports administration in Forbes.

At Bown’s Sportspower Forbes a fun, fit and healthy lifestyle is our passion. Together with expert local advice and comprehensive product range including footwear, clothing, fitness equipment, sporting gear, ballet apparel and local knowledge, we have the products and services for all your sporting needs.

With the benefit of our group we are committed to customers with the best range and prices.